Ubud Writers & Readers Festival was first organized in 2004, is now known as one of the largest literary festival in Southeast Asia. The mission of UWRF is realizing an international festival that celebrates thoughts, ideas, as well as global isues. UWRF is a major annual project of the nonprofit foundation Mudra Swari Saraswati founded by co-founder, Janet DeNeefe as a form of recovery after the first Bali bombing tragedy.
Ubud Writers & Readers Festival (UWRF) for the 13th time will be the arena celebration of great ideas and wonderful stories. The largest literary festival in Southeast Asia is ensuring the presence of more than 160 writers, artists, journalists, musicians, lawyers, and activists to gather in the heart of the arts and culture of the island of Bali, Ubud, together lovers of literature and other art enthusiasts from around the world that you can visit using Bali Tours which offer selected budget Bali tour packages.
As announced in January, a Hindu philosophy from the 6th century, Tat tvam Asi, which means 'I am you, you are me', the main theme of this year UWRF. Indonesian nation consists of various ethnic, religious, cultural, and long history, making it a pluralistic nation with diverse backgrounds but still one. 'I am you, you are me' is also defined as 'we are one' and it covers the philosophy of UWRF during this time, where debates unanswered regarding human rights, the value of a difference, and the energies that make up life , environment, and identity of a nation will be raised. One of the big headline about Tat tvam Asi that will be discussed at UWRF is about limiting within a nation.
Posted by Unknown at 9:00 PM No comments: 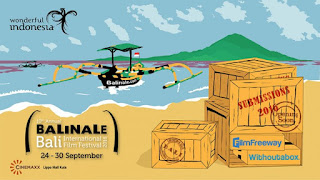 Bali International Film Festival (BIFF) or more known to be called Balinale 10th edition will take place 24 to 30 September 2016 Cinemaxx, Lippo Mall Kuta which you can visit during your Kuta tours. In terms of numbers of participants, issue of this decade led to more participants. Recorded 31 countries are participating in bringing 106 movies to enliven the event.
One of the founder of Bali Taksu Indonesia to organize Balinale was mentioned, some of the participating countries other than Indonesia, including the United States, Australia, Brazil, Ecuador, Singapore, South Korea, Taiwan, Japan, China, Israel, Britain, France, Germany, Italy , Croatia, Canada, New Zealand, and several countries in Africa.
Indonesia as the host represented more than 20 films -- long, short, and documentary -- who have passed the selection. Some local filmmakers work long film that will be aired in full to visitors of whom are Copy of My Mind, My Stupid Boss, The Promise, and Negeri Van Oranje.
Rows of the film joining several cinema from other areas that are included in the program "Asian Premiere", namely Early Winter (production Australia / Canada), Rigoberta Menchu: Daughter of the Maya (USA), Mr. Gaga (Israel), Elle (France), and the Hunt for the Wilderpeople (New Zealand).
As the festival an international class which is affiliated with the Motion Picture Association, Asia Pacific Screen Awards, Asean International Film Festival and Awards, Asian Film Commissions Network, American Film Showcase, and the Sundance Institute's Film Forward, Balinale a forum meeting place for filmmakers from different countries. Since it was first held in 2007, aims Balinale invited directors from abroad to their films in Indonesia, as well as introducing the natural beauty and culture of Indonesia.
Balinale also intended as a forum to develop understanding and respect for freedom of expression, human rights and intellectual property rights, and to encourage cross-cultural respect and tolerance through workshops, seminars, and film festivals. For the implementation of this year, the theme is "No Boundaries" or "Without Limits". That means there is no limit in creativity for expression.
Posted by Unknown at 5:29 PM No comments: 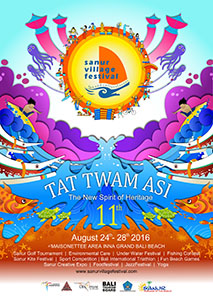 After the Ubud Village Jazz Festival the SVF event was officially opened, starting with a variety of activities from the date of August 14 to 21 2016 including Bali International Triathlon, Surfing, Tennis Tournament, Beach Clean Up, and Photo Exhibition.
Posted by Unknown at 6:18 PM No comments: